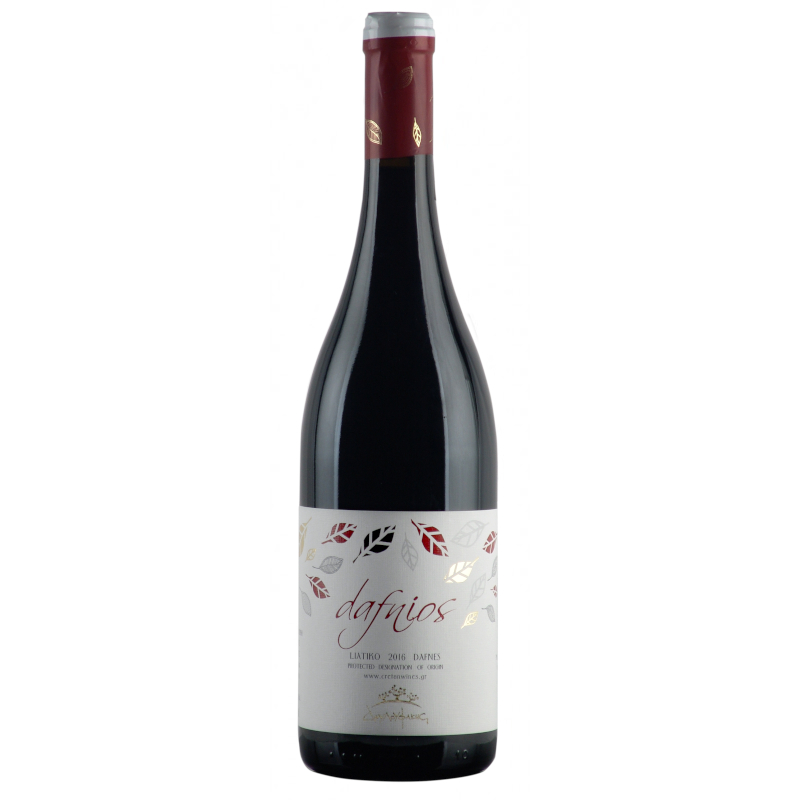 Wine of the Month
Larisa Code
Featured Wine: Dafnios Red Wine
Grape Variety: 100% Liatiko
Production Zone: Crete, Greece
Vinification: Alcohol fermentation lasts for three days at 20’C and then continues at 25’C in stainless steel tanks.
Aging: The wine is matured for up to 12 months in French oak barrels.
Vintage: 2018
Color: Deep Garnet
Price: Under $20
I am a sucker for most things Greek; the food, the people, the buildings, the air, the beaches, the wine; it all makes my heart go pitter pat. I loved my visit to Greece, many moons ago, a faded memory it was. But then, I came across Dafnios’ Red Wine, and was almost immediately flooded with a very vivid memory of sitting in a café at a train station in Athens, the tail end of my trip, quite broke, sipping a soda pop and waiting for a train; luckily, I met a wonderful man who insisted I was too skinny and invited me to join him for a meal. He ordered one dish after another and seemed almost as thrilled as I was with every bite I took. We sat at that station, eating and drinking for hours, he barely spoke English, I did not speak Greek, but it was pure joy. As more and more plates of food came to the table, along with jugs of wine, I was existing in one of those rarities in life, a perfect moment.
Alas, I have no idea what sort of wine we drank that day, but, when I opened this bottle and was enveloped in leather, earth, nutmeg and cinnamon, I felt convinced there were definitely some Liatiko grapes involved. And then, upon my first sip, my tongue was embraced in earth and acid with short lived but gripping tannins and a lightness that I always associate with so many European house wines. The acidity and dryness could be compared to a Chianti but this wine is so much lighter and the finish is less bold but lingering.
This wine is filled with the simplicity and depth of earth. This wine stirs up a desire for late Spring gatherings. This wine would be perfect to sip after a day of working in your yard as you admire what you created. This wine is the sun setting in Greece, welcoming, warm and delicious.
It was just by chance that I was cooking a rack of lamb, minty rice, cabbage and asparagus for dinner. It was just luck that this was a nice meal to pair with Dafnios. It was unfortunate that I was unable to find any fresh Feta cheese at the market; a giant salad would’ve been great, spanakopita would’ve been great, moussaka would’ve been great; it really is the perfect wine to pair with Greek food; surprisingly, the cabbage was also an excellent match; I am sure it was the sweetness of the cabbage that complimented it so well. And perhaps, because of the frequent and subtle sweetness in Greek food; tomatoes, nutmeg, eggplant (to name a few) it goes so well; maybe they had a plan?
To create a perfect setting, I would be back at that train station, sitting at that café, spending hours eating, drinking and people watching. If I could, I would send you to that same train station; you would love it. But, alas, the world is so different now, maybe someone would be mad that a boisterous Greek man insists she is too skinny, or maybe someone would be scared that a stranger is insisting on eating and drinking with him for hours on end, or more likely than not, no one would ever meet because they are all staring at their phones, unaware of their surroundings. No matter what your situation, create a nice environment; milk jugs plus peonies is one of my favorites. As always, if outdoor dining is an option, do it. If you are able to enjoy the sounds of your neighborhood, do it. If that is not an option, I was diggin’ a bit of Zero Seven and Radiohead, both pair wonderfully with warmer weather, delicious food and delicious wine.
Yia Mas!
Dafnios Red Wine